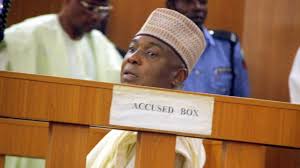 CROSS EXAMINATION AT THE TRIAL OF THE SENATE PRESIDENT AT THE CCT TODAY:

The evidence in chief by the Prosecuting
Council, Rotimi Jacob and his witness from the EFCC ended about 3.58pm today. The cross examination of the Principal Witness commenced ernest by the leading counsel to the SP, Chief Kanu Agabi SAN, who has been anxiously waiting to bombard the principal witness with relevant questions.

Q1 from Agabi: Can you tell this Honourable Court when you file your case against the Senate President, Abubakar Bukola Saraki?

Q2 from Agabi: I understand that the report of your findings in respect of your investigation conducted on Bukola Saraki should be a basis for filing your case against him?

Q from Agabi: Can you please tell this honourable court when your report was written?

Answer by witness: I can’t remember.

Answer by witness: The report was prepared and dated 30th October, 2015.

Q from Agabi: which one is supposed to come first, is it the investigation report or the suit?

Agabi: Under normal procedure, your investigation report should come first and form the basis for filing case against the defendant. In this case, you prepared your report about 45 days after the case had been filed.

Q3 from Agabi: Did you received any letter of complaints or petition from the Kwara State Government that there was a specified amount embezzled or mismanaged by the defendant, when he was the Governor of Kwara State, that it wanted the EFCC to investigate?

Witness: No. There was no any letter of
complaints from the The Kwara State Government.

Agabi: If you can remember vividly, at the
beginning of your witness, you said that your office (EFCC) received several petitions from Kwara state alleging the defendant of embezzlement, mismanagement of funds, among others. You stated that most of the petitions came from an organization known as KWARA FREEDOM MOVEMENT, and that was the reason why an intelligent investigation team, headed by you was constituted to investigation the activities of the defendant, while he was the Governor of Kwara State between 2003 and 2011?

Witness: Yes it is true.

Agabi: Did you go to the Corporate Affairs Commission to investigate or confirm the legal existence of the KWARA FREEDOM MOVEMENT?

Witness: No. We did not go to the Corporate Affairs Commission for any confirmation.

Agabi: Let me confirm to this honourable court that we went to the Corporate Affairs Commission to confirm the legal existence and status of the KWARA FREEDOM MOVEMENT. We were told that the Association is not registered at all. They are not legally exist. Let me also remind this court that any organization that is not duly registered with the CAC should not be honoured in that circumstance, as it is not a legal entity.

Agabi: During your investigation exercise to Kwara State, did you visit the Pension Board to confirm the pension scheme for the past Governors in the state, and how much pension is payable to the defendant?

Witness: No. We did not go to the Pension Board. It was not part of term of reference given to our team.

Agabi: Did you conducted a forensic report of the bank statement of account obtained in respect of this case?

Witness: No we did not conduct any because we are not a forensic expert.

Hope we are all following this case? Watch out for more update as the case continues.

SUPERIORITY BETWEEN THE ALAAFIN AND THE OONI; FACT OF THE MATTER

What’s pushing your team members away from you?

One Nigeria is better “Lamido Sanusi”