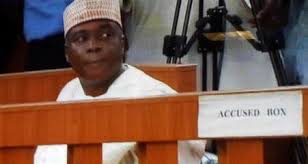 Oyeleke Olayinka wrote:
As Michael Wetkas the EFCC operative who conducted the forensic analysis of Bukola Saraki’s accounts gave testimony before the code of conduct tribunal it immediately became as clear as crystal why Saraki tried everything possible to stall his trial.
As the Detective reeled out his findings, one wondered how Kwara State is still existing on the map after such alleged pilfering.
No, this can’t be true. How can a person pay in 600 to 900,000 fifty times in one day, with the aim to avoid the sacred amount of 1 Million that triggers an automatic red flag to the Serious Fraud Office of the NPF and Financial Intelligence Unit of the EFCC .
But despite this Saraki is not guilty.
Nigerians are the guilty ones for sitting quiet while Societe Generale Bank was brought to its knees by this same Saraki. Scores lost their life savings as the Bank was run like a personal kingdom where absolute power holds sway and of course such power corrupts absolutely.
To see grown men cry is not a figment of my imagination for as a student of Medilag in which Societe Generale Bank was the only rival to the old haggard Union Bank in Idi-Araba, I personally watched the horror show of the collapse of that bank.
There was no restitution. No one went to jail for gross financial mismangement. And the only one who escaped the horror was Jay Jay Okocha who was indemnified his huge losses by the Government because of his celebrity status as a national soccer icon.
Many others were not so lucky. Nurses, Doctors and students were left to scramble for furniture and tables in lieu of their life savings as the collapse of Societe Generale bank is as clear in my memory as yesterday. Even the louveres in the banking hall and car tyres of the banks official vehicle were unbolted by angry customers in the mad scramble for a few assets of the bank which could offset their loss.
And upon this platform isn’t it foolishness to elevate the same unrepentant architect of this grand collapse to the corridors of Government house. But alas the guilty Kwara people decided to go down this road to perdition.
Yes the state treasury is his reward for being born with a silver spoon into the political dynasty of the priviledge.
Human beings not ghosts were willing conduits in the alleged mass movement of money from Government house to private bank accounts from which it was converted into dollars to buy palatial homes overseas and live like gods amidst the poverty of the masses.
Indeed he is not guilty. It is the people that failed to blow the whistle when these acts were going on that are guilty.
It is the people that queued up for a morsel of Amala and gbigiri dished out from the corridors of the Sarakis like a mess of porridge which they failed to realise was a guise to obtain their birthright to the dividents of democracy in exchange for perpetual servitude, that bare the guilt.
Stomach infrastructure replaced good governance and now we want to blame Saraki for doing what “others” were doing. Or did he do more than Ibori and Alams who despite all the evidence against backed by their conviction by a court of competent jurisdiction are seen as shininng Knights in spotless armour until they were rendered indisposed.
Release Ibori today from jail in the UK and I can bet my last kobo that he will return to a hero’s welcome.
“Triumphant home coming of our dear son”
“A Prince comes home”
“James Mandela Ibori you are welcome back”
Will be the littany of placards that will line the runway as Ibori returns like a mighty conqueror instead of being pilloried with rotten tomatoes.
But that is the social fabric of Nigeria. We love our captors who have held us hostage for so long that Stockholm syndrome has set in.
There is no semblance of unity for ethnoreligious bias pushes us to protect the guilty.
Why should 60 SANs leave their booming practice to defend a Senate President when only 1 can speak in court at a time?
Why should 30 to 90 Senators follow Saraki to court in a show of solidarity without thinking twice about what their constituencies think and feel about this incident?
Besides the courts are as lame as a lame duck thus are unlikely to find a big and powerful man guilty when he can hire a battalion of SANs. And with the case of Ricky Tarfa on show it is not misplaced to allege that some judges are in the pockets of these ubiquitious SANs hence wherein can justice be found.
Saraki is not guilty. We all are. How many Nigerians can resist the trappings of power enriched by Ghana Must Gos of hard currency? How many can think of the suffering masses when their generations yet unborn have not been catered for so that the dynasty may live on.
In less than 24hrs the Panama papers has forced out the Prime Minister of Iceland. Saraki soldiers on because he is not guilty.
Who will dare protest again him in Kwara State after eating his Amala? That is pure greed. Who will dare call for his resignation after enjoying Special assistant status under him? Only a mad man.
Nigerians are guilty of creating our own problems. How else will one describe the elevation of Saraki to the Senate Presidency when in other climes he should be making license plates in a state penitentiary.
Saraki is innocent. We are the guilty ones.

How long should sex last?