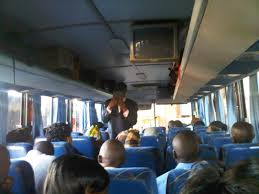 Earlier this week, on Wednesday morning, I got into my car to go to work. Ta-yun-yun-yun,….. my car refused to start. It was already 6.30 am and I was not going to start checking anything.  So I just opted for going to take a “danfo” (public) bus. Yes, I know, I can’t afford taxi abeg.

So I got into this danfo bus and thought to make use of the opportunity that I’m not driving to read a report which I was supposed to give an opinion on to my boss by 9am on same day. As I was the 2nd to last passenger, I had not even finished reading the 2nd page of the 32 paged document when the bus proceeded on the journey to CMS in lagos island.

As soon as the bus pulled out, I heard the piercing shout “Prai, prai, praiissee the Lord”….  one or 2 people in the 22 seater bus murmured “Hallelujah”. I quickly searched my pockets for an earpiece and plugged the airpiece into my ears while I tried to continue reading. But the decibel level of this pastor was something else. It was like I was sitting right next to an “Ahuja” woover loud speaker. There was just one guy between me and the pastor on my seat row.

After trying to read for about 10 minutes without success as the noise was piercing through the earpiece, I decided to call the attention of the pastor to my suffering at his preaching. So as not to be labelled a “demon”, I leaned towards him and whispered,  “excuse me sir”. He didnt hear, so I thought.  So I tapped on him lighthly and whispered again, “Excuse me man of God”. He completely ignored me. I then realized he was actually reading from the bible at that time. I said to myself,  “Olufemi, respect the Bible, approach him again when he finishes reading from the Bible”. So I waited. All the while the guy between me and the pastor was looking at me incredulously.

When he finished reading the bible, I approached again, tapping him lightly,”Excuse me pastor”. I was surprised when he again ignored me and then said “the kingdom of darkness is trying to interfere with the preaching of the gospel”.  That was when I lost it. I mean completely!

Those who know me know that God has granted me a very loud boom of a voice. When I shouted “what is the meaning of this rubbish?”, the whole bus was forced to pay attention. I was really vexed. “Is this what Jesus teaches us to do? Did he ask us to inconvenience others because we want to preach? Are we supposed to ignore people who try to call our attention to a sufferring we are inflicting on others?” This were the sentences I barked back at his own rantings which he had picked up again after his momentary shock. He tried to just continue preaching. I told him, “no one in this bus would hear that your preaching if you dont stop.”.

Growing up in Mushin has its own advantages as we learnt a lot of yoruba poems. So I started singing (yes, in mushin, we dont recite poems, we sing them) the poems one after the other in my very loud voice while the preacher was also preaching in a very loud voice. I started with “Omo pupa o…. Omo Pupa le mi n fe” (I want a fair skinned damsel). Then went into “Ja itana to n tan, to tutu to si dara…” (the yoruba version of “Tick says the clock, tick-tick”). By the time I entered “Ise loogun ise, mura si’se ore mi, ise la fi n d’eni giga” (Hard work is the antidote for poverty, hard work makes a lowly person into a celebrity), someone in the bus shouted, “would the two of you just shutup?”

Then the reactions started coming in. Someone said “what Is even wrong with this man? Can’t he just respect the word of God?” Another faced me and said “are you not aware that there is freedom of worship in Nigeria?”. I retorted that “there is also freedom of speech in Nigeria so I am also exercising that freedom”. Then I went into another song we used to sing on assembly, “l’ayo l’ayo la n lo’le, la n lo’le…..” ( in peace, in peace we proceed home…). Another person told me, “but mr, why are you angry na, preaching in the bus is a normal thing na”. I told him, No its not normal to disturb others in a bus. I moved on to the next poem “Ede time ede, remi ko ni’ya, o dabo, o dabo kayode, elere boolu… ( its a warped way of spelling ‘exercise book’ in yoruba back in the days. Who even invented this crazy spelling sef?)

By now, my voice had completely overshadowed the pastor’s but he was still also raising his voice. we had been on this for about 40 minutes, not one person told the pastor that he did anything wrong. He was ranting, I was barking, other passengers were blabbing. It was a cacophony of sounds. The madness was total.

A pregnant woman behind me tapped me and I could see agony in her face. She couldn’t even talk, she just rubbed her palms at me in a begging gesture and she touched her head signifying a great headache. I was touched by her helplessness, so I stopped my poems and allowed the pastor to continue with his own rantings.  We were already around Apongbon by this time.

Ambode should pass a religious bill in lagos to curb the menace of these pastors disturbing our peace in the buses before these insensitive pastors would cause a problem some day that may result into breakdown of law and order.

BEFORE YORUBA HISTORY IS DISTORTED

Which kind wahala be this, Advise me