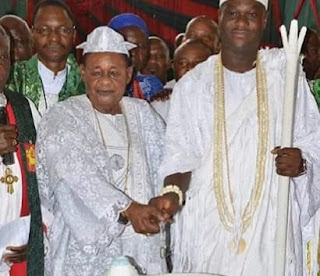 All human beings are equal before God; the Almighty. He is our Sustainer. The Creator of the worlds. However, God in His infinite wisdom has created man and placed some above others. It is a providential design to achieve universal order, harmony and peace. He has placed the kings over their subjects to ensure coordination. I love history, and I loathe history being distorted. I am neither an ethnic chauvinist nor jingoist. But I have special affinity for history. It is worrisome when people concoct genres of myth in the face of impeccable facts. I wish to delve a bit into in the history of Obaship in Yorubaland ,with a special focus on His Imperial Majesty, The Alaafin of Oyo and His Royal Highness, The Ooni of Ile-Ife.

History has been so kind and friendly to the Alaafin that he does not need to get into any battle for supremacy with any Oba, either in Yorubaland or anywhere in the universe. No other Oba had combined humility with royalty to meet the demands of modernity like the incumbent Alaafin of Oyo, His Imperial Majesty, Kabiyesi Iku Baba Yeye,Oba Lamidi Olayiwola Adeyemi III .
According to impregnable sources of Yoruba history, Oduduwa is the ancestor of the Yorubas. Oduduwa gave birth to a son, Okanbi. Okanbi gave birth to seven male children (Oranmiyan, Olowu, Alaketu, Onisabe, Orangun, Olupopo, Oba Benin). Nowhere in history is Ooni mentioned as one of the Yoruba Royal Families. The Ooni is no blood relation of the seven sons of Okanbi. Historically, Ooni has no traditional or political authority in the Yoruba hierarchy. Riches and political fame of the Ooni from 1954_when Ooni Adesoji Aderemi was made the Governor of Western Region by the Awolowo Administration cannot undo the pristine history or invalidate the truth about the Yoruba race.
History has acquainted us with copious facts that Ooni is known to have been appointed by the Alaafin as the custodian and keeper of the rituals and oratory of the gods in Ile-Ife. The stool of Ooni was never known to be big on hereditary kingship. Oonis have been the descendants of Adimu the Olorisa, instead of being the direct descendants of Oduduwa. The Alaafins of Oyo have been the paramount kings and rulers of the Yorubas. Alaafin, in recognition of his leadership,had intervened in numerous boundary disputes involving the territories of the Ooni and Owa Obokun of Ijeshaland
Some years back, when Oba of Benin visited Ile-Ife, the comments made by Ooni Sijuade (I am happy to welcome back my son and brother to the land of our ancestor, Oduduwa) was quickly refuted by the Oba , through his response:”who is the son of who?”
Moreover, The British as it was in their tradition recognized lineage as meaning supremacy and legitimacy, preferring to sign the Treaty of Cessation with the Alaafin as the Head of the Yoruba Nation.
Also, on August 8th,1960, when Sir Adesoji Aderemi held sway as the Ooni of Ife, Alaafin Bello Gbadegesin Ladigbolu II was appointed the Chairman of the Council of Obas for two years, Oba Adesoji never batted an eyelid. In 1962, when Ooni had ceased to be Governor, he reverted to his traditional stool and was attending the meetings of Obas which had The Alaafin as the Chairman. When the first term of Alaafin Gbadegesin expired, he was reappointed for another two-year term. The Alaafin was reappointed for the third time in 1965 until the military struck.
In 1966, Lt Colonel Adeyinka Adebayo made the Ooni Chairman and the Alaafin his Deputy. Only the Alaafin,among other Obas, protested the awkward appointment and sought redress, as Alaafin does not play a second fiddle to any Oba in Yorubaland. In 1976, the military government had to reinstate the Alaafin as the Chairman of the Council.
It is also a distortion to address the Ooni as “His Imperial Majesty”. This is another gaffe! Only the Alaafin is addressed as His/Your Imperial Majesty. You cannot assume the title when you have no empire you rule over. Alaafin ruled over a vast empire (From Ilorin to Dahomey and to some parts of Ghana; Ashanti) while Ooni did not have that royal privilege.The Ooni is better addressed as His/Your Royal Highness. This is history,my people!
The preeminence and supremacy of the Alaafin is obvious from the above assertions and as deeply espoused in many Yoruba books of history. We should not distort the history by pitching the Alaafin against the Ooni. Oba Adeyeye Ogunwusi made an unequivocal statement on his coronation day that he was not into any supremacy contest with the Alaafin. Therefore, Alaafin remains the undisputed leader of all Yoruba monarchs.

Donald Trump, Islam and the US Presidential Election

5 Things You Can Do to Avoid ‘Fake Work’