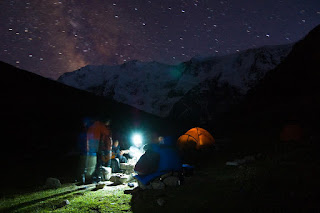 The basis of any relationship is trust. Trusting that you won’t be left behind, trusting your life in someone else’s hands and allowing yourself to be vulnerable, knowing that you won’t be judged or loved any less for your actions and thoughts. This is relevant also for groups that have a common mission like breaking a record or organizing a risky trip. When you open up and create such a bond, the thrilling situations and risks that you’re exposed to during climbing mountains will only reinforce it.  It has been scientifically proven that emotional connections are strengthened when doing physical group activities that require intense effort. You are also more likely to bond when performing activities that get your adrenaline pumping.
Mountain climbing is an exciting activity that requires psychological resources, a risk seeking personality and careful planning. All these have to be paired with the support of a group of climbers for a chance of success or better results. Any kind of group has its own dynamic, but one of the things that is most likely to appear when exposed to social interaction is social pressure. It can keep a lot of people from voicing their ideas or feelings and this will lead to frustration and eventually conflict.
As a group leader, the first thing that you should aim for is to create a safe environment where members understand that no judgements should be made about what others communicate. Another helpful trick is to encourage them to express themselves clearly, to say something and back it up with explanations and to always be aware of their tone of voice. Sometimes it’s not necessarily the message that hurts or offends, but the way that it is delivered.
Are you facing a problem? Make sure your fellow climbers know that when trying to solve it, stating ideas and feelings can generate empathy, while accusing someone else will only generate defensiveness. Expressing emotions can have a positive impact not only on the way they will interact, but also on building their confidence and trust in each other. Acknowledging mistakes and accepting feedback, rather than becoming defensive is also something that can help when dealing with an issue.
Being part of a group is both challenging and rewarding. Just make sure you all understand that each and every single individual is valuable and make them feel like it and never forget to practice what you preach while on the climb to your best selves.

Which kind wahala be this, Advise me