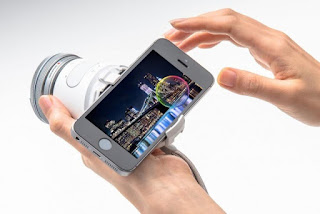 On Tuesday, Olympus announced that it will bring its Air 01 Micro Four Thirds (MFT) interchangeable lens camera (ILC) to the U.S. and Canada in July. Similar in concept to Sony’s QX1, the Air is a lens adapter designed to work with iOS (7.0 or higher) and Android (4.0 or higher, as well as Amazon Kindle Fire) devices, with all the camera guts inside a compact cylinder, minus a display and traditional camera controls. The lens mount is compatible with MFT lenses from Olympus, Panasonic, and other manufacturers.

The Air was announced in February for the Japanese market, where it’s currently on sale. The North American version is the same, but will have its own app and support for Amazon Cloud Drive. The Air will sell in the U.S. for $300 (body only; less expensive than a full MFT camera), or $500 with a 14-42mm lens. It ships in July.

Like the QX1, the Air uses a smartphone or tablet to control the camera, as well as a live view display. While the QX1 uses an APS-C sensor, the Air has a 16-megapixel Live MOS MFT sensor (also used in the OM-D E-M10), which is smaller in size than APS-C. However, from our experience with both Olympus and Panasonic cameras, the MFT sensor is capable of delivering great image quality. The Air also uses the latest Olympus image processor, the TruePic VII, which is in the new OM-D E-M5 Mark II (a DT Editor’s Choice camera). With the Fast AF 81-point autofocus system, 1/16,000 high-speed electronic shutter, ISO of 100-16,000, and 10 frames-per-second continuous shooting, Olympus says the camera delivers DSLR-like performance, even in low-light situations. The Air saves images and videos onto MicroSD cards, and charges via Micro USB; the battery is rated for 320 shots.

The Air has a rear cradle design that fits various-sized smartphones and tablets. Unlike Sony’s clamp design, which doesn’t fit all devices, the Air tilts a device at an angle, which makes it slightly easier to use the camera while framing a live view image on a phone or tablet. The Air uses Wi-Fi and Bluetooth to connect to your phone, with the same quick Wi-Fi setup as other Olympus cameras, which display a QR code you simply scan with the camera. The connection seemed fast, strong, and stable during a demonstration Olympus gave us. While the Air can be used independently (like an action cam), it’s meant to be used with a smartphone or tablet, so a good, reliable connection is crucial.

With an M.Zuiko Digital ED 14-42mm F3.5-5.6 EZ pancake zoom lens , the Air is a lightweight and compact camera you can throw in a bag (on its own, the Air weighs 5 ounces). When your smartphone photography requires a bit of a help in the zoom and image quality departments, simply attach the Air. But the camera is more than just a smartphone accessory: Mount an M.Zuiko ED 40-150mm f/2.8 PRO telephoto lens and the Air transforms into a serious camera, although you may need a tripod or custom rig, which Olympus used in a demo setup.

Sure ways to make money Online

PRECAUTION is more powerful than EXPERTISE!